Back to all posts

DUKES of Dixieland Rock the House! 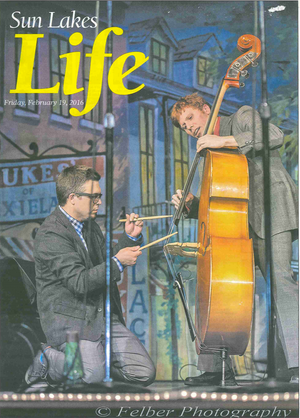 One of the most exciting and spirited performances presented by the Friendship Club happened last week when the “Dukes of Dixieland” graced the stage of the MCH ballroom with a fabulous jazz program called “Celebrating Satchmo”. On stage against a lovely backdrop that represented the famous New Orleans French Quarter, Kevin Clark on trumpet was the leader of the group, which included Ryan Burrage on clarinet, Alan Broome on bass, Joe Kennedy on piano, David Mahoney on drums, and David Phy on the slide trombone.

Each man wore a suit with a brightly colored or patterned shirt and tie, and Clark kept time with the music in his black and white shoes. As a matter of fact, not one of these unbelievably talented men stood still during the entire performance. With feet tapping, bodies bouncing, heads bobbing, fingers snapping, eyes scrunched up and closed, and cheeks puffed out, they played their instruments with unmatched style and passion that thrilled the crowd. Each man had a solo on almost every song, and their fingers flew across their instruments as their entire bodies kept time with the music.

Mahoney performed an amazing drum solo that brought the audience to its feet. He played every surface of every drum in his set, plus the microphone stands, and even the floor, as, on his hands and knees, he drummed his way over to Broome on the bass. He even drummed the strings and the bridge of Broome’s big bass fiddle before backing up and returning to his set of drums without ever losing the beat.

Accompanying himself on the piano, Kennedy sang a few songs, and Broome did the same on the bass, impersonating Louis Armstrong on songs including “Life is a Cabaret,” “Mack the Knife,” and “What a Wonderful World.” His impersonation was spot on, and several of the songs he sang, backed up by the entire group, have been picked up by PBS for a future showing.

Although they rarely invite guests to join them on stage, they warmly welcomed Stan Freese and his amazing sousaphone (tuba). Freese had just recently retired from Disneyland, and his huge instrument wrapped around him like a snake. He had it painted like a boa constrictor, fangs and all, “because it sucks the wind out of me,” he said.

The beauty of jazz, especially New Orleans style, is the different combinations of freely played notes that fill out a melody or theme following an established beat, like a theme and variations in classical music. The Dukes often play in jazz funerals in New Orleans, and they shared several of the tunes they play regularly. The audience enthusiastically joined in singing “When the Saints Go Marching In,” and the finale was the beautiful “Hello, Dolly” that was such a big hit for Louis Armstrong.

The Dukes of Dixieland regularly appear on dinner cruises on the Steamboat Natchez along the Mississippi River, playing what they call “Riverboat Dixieland Jazz.”

They certainly showed the Sun Lakes crowd that they are masters of their art.