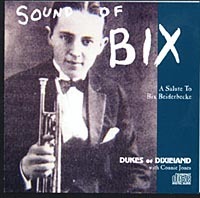 A RECORD REVIEW BY FLOYD LEVIN

"SOUND OF BIX A SALUTE TO BIX BEIDERBECKE"

DUKES OF DIXIELAND WITH CONNIE JONES


As the title indicates, this recording salutes rather than imitates Bix Beiderbecke, who was only 28 when he died in 1931. Within these 52 minutes, the Dukes of Dixieland's fresh arrangements gracefully capture the spirit and evoke the feeling of the great jazz cornetist without attempting to re-create his recordings.

During the few years in which he appeared on the music scene, Bix greatly expanded the vocabulary of jazz. Because of his harmonic explorations that reached into the future, he was probably the music's first modernist. By combining sensitivity and refinement with expressive force, he created some of the warmest sounds ever produced by a brass instrument. Sadly, his name appeared in print only three times while he was alive. (It appears a dozen times here!)

The opener, "Ostrich Walk," showing Bix's partiality to the Original Dixieland Jazz Band, is reshaped into a polished swinging version that emphasizes Tim Laughlin's tasty clarinet. The new arrangement of "Singin' the blues," while reverent to the tune's structural integrity, avoids mocking the acclaimed source material that included one of Bix's most widely praised and often imitated solos.

"Davenport Blues," Bix's first recorded composition, is treated as an alluring stereo cornet-trumpet collaboration by Connie Jones and Kevin Clark. The Dukes shift into a steamy overdrive on the final chorus of Hoagy Carmichael's "Riverboat Shuffle," recorded by Bix and the Wolverine Orchestra in 1924.

Similarly, their blazing final bars on "At the Jazz Band Ball" elicit an image of Bix's intensity and rhythmic authority. The piano cameo in "In the Dark," further evidence of Bix's exploratory compositional skills, is an introspective change of pace. The brief moody number is beautifully interpreted by Tom McDermott. The band accentuates the bluesy quality of Fletcher Henderson's "Goose Pimples," with Tom Fischer's resonant bass sax reflecting Adrian Rollini's brilliance on Bix's 1927 recording.

Obviously the Dukes – whether cohesively sailing through the stirring ensembles, or soloing impressively – enjoy playin together. The "Sounds of Bix," articulately acknowledges their appreciation of Beiderbecke's enduring contribution to jazz. The recorded "Sounds," together with Lew Shaw's articulate album notes, casts a new light that very brilliantly illuminates a triumphant, but short, career.

Sounds of Bix (Listen For Free!)

This recording salutes rather than imitates Bix Beiderbecke, who was only 28 when he died in 1931. Within these 52 minutes, the Dukes of Dixieland's fresh arrangements gracefully capture the spirit and evoke the feeling of the great jazz cornetist without attempting to re-create his recordings.