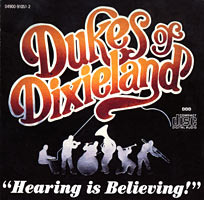 THE DUKES OF DIXIELAND, HEARING IS BELIEVING

This is a good record for the blindfold test. Put on any track and you'll find good dixieland band out of New Orleans playing good dixieland jazz. But who is it? Give up? It's the Dukes of Dixieland!

Today's Dukes have put out a CD that is my idea of a fun 56 minutes and 33 seconds of traditional jazz. The ensembles are still pretty highly arranged, but there are occasional solo outings (especially from clarinetist Tim Laughlin) that show that today's Dukes are fine improvisors in the New Orleans tradition. Pianist Tom McDermott has impressed a number of people whose opinion I respect as a ragtime pianist of some considerable ability. He shows it on this CD in his feature on Scott Joplin's "Maple Leaf Rag." None of the other names is familiar to me, although they certainly are fine players, an I guess there's got to be a first time for hearing any new players.

The horns are all to the good. Taken on their own merits, they are excellent and, between you and me, Tim Laughlin is as good as any clarinet man these Dukes ever had. So much the better. Carry on, Dukes, carry on.

Hearing Is Believing (Listen For Free!)