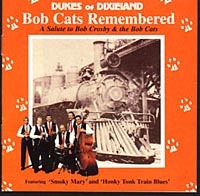 PRESENTS FROM THE PAST

'...Don't be fooled by the term "re-create." This is living, breathing, fiery jazz, as vital and uplifting now as it was then.'

In jazz tributes, there is interplay of past and present. The past resembles a melody to be improvised on. Not only a melody, but also harmony and rhythm.

Harmony is the color of the past; the artist's personality, the mood of the original performance, The spirit of the times. Rhythm is less impressionistic. It is the pulse of the past; two beat, swing, bop, Latin, cool jazz, free jazz.

The best tributes do not simply repeat the past. They use it as a vehicle for something new. But how new? Can we trust the artist who says his shrieks and screams are a tribute to Louis Armstrong? Can we suffer the performer who anesthetizes Duke Ellington's music one more time? The answer lies with each listener. It is a matter of his capacity to reconcile old and new. Some like a steady dost of abstraction. Ohters view tampering with the work of the gods as sacriledge.

The worst tributes fail neither becuse of abstraction nor replication but because of vapidity. On the surface, a tribute is easy. It provides an instant theme and an instant attachment with, in most cases, a figure or an era recognized as great. But it must have a raison d'etre beyond these. It must, in a sense, improve upon the past, explain or illuminate something not shown by the original. But it must not destroy the glow of the original.

With these thoughts, herewith is consideration of the Dukes of Dixieland's latest CD. The Dukes have packed it with tunes, several sparked by drummer and leader Richard Taylor, that re-create the arranged Dixieland of Bob Crosby's late '30s, early '40s small group, the Bob Cats, on "Bob Cats Remembered" (Leisure Jazz 0-49009-1063-2). Don't be fooled by the term "re-create." This is living, breathing, fiery jazz, as vital and uplifting now as it was then.

The inspired, reeling ensemble work on "Smoky Mary" sets the tone for the rest of the album, which includes tunes such as "Honky Tonk Train Blues," Bob Haggart's "My Inspiration" and "South Rampart Street Parade," and Joe Sullivan's "Little Rock Getaway."